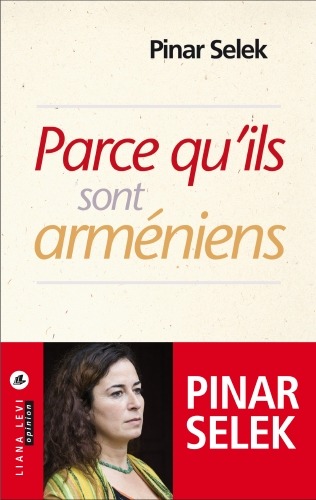 April 2015 will mark the centenary of the Armenian genocide—a dark chapter in Turkish history, still controversial, still taboo. What might a Turk born in the 70s make of this community and this period of history? Pinar Selek responds with this personal and engaged account woven from memories, observations, and encounters. We learn along with her, from the inside, what it means to be formed by reciting slogans at school proclaiming national superiority, studying from misleading textbooks surrounded by fearful and silent classmates, wandering through a city where Armenian names have been expunged from public signs, campaigning in extreme-left movements having accepted this denial. The sensitive and controversial testimony of a woman of conviction whose personality and writing continues to be influenced by the Armenian question.

Pinar Selek was born in 1972 in Istanbul to a left-wing family (her father was imprisoned for five years following the 1980 coup d’état). A sociologist by training, her works deal with minorities oppressed by the Turkish Republic. An activist for the defense of rights and peace in Turkey, she founded an anti-militarist association and took part in the creation of the first Turkish feminist bookshop. An incredible judicial nightmare began for her in July 1998: an explosion in an Istanbul bazaar left seven dead; she was accused of abetting rebel Kurds in a terrorist attack. Arrested and tortured, she was jailed for two years until forensic reports concluded it was…a gas leak! Acquitted by several Turkish tribunals, in 2014 her sentence to life imprisonment was quashed by the court of appeal. But the case has now been referred to another criminal court and a new trial is set for this October 3. Her support committee counts almost 4,500 people, including the writers Orhan Pamuk and Yachar Kemal.
A political refugee in France, Pinar Selek has taught at the University of Strasbourg and is currently carrying out research into the transformation of the militant Turkish sphere and its influence on movements of the Armenian diaspora, at the Collegium of the Lyons University ‘grande école’. Her first novel, The House on the Bosphorus, was published by Liana Levi in 2013.
Visit the author’s website at www.pinarselek.fr.